← Am*zon: The Smooth Brome Grass of Your Local Economy
Whole Foods and the Flat-Earthers →

Who Will Save Publishing?

Utah towns designate June 30-July 4 Independents Week. A Grand Junction public radio station cancels its Am*zonSmile donation campaign after an independent bookseller suggested the station would get more donations from local businesses than through the Am*zonSmile program if it didn’t promote its relationship with their biggest competitor. A survey sponsored by UPS finds that the number of consumers who are willing to go out of their way to shop at small, local businesses, even if it costs more, has increased in the last year. Sherman Alexie appears on the Colbert Report to tout an upcoming Hachette title–not one of his–that Am*zon has made unavailable for presale, and Stephen Colbert puts a link on his website to Powell’s Books so folks can order any Hachette title without delay and offers this sticker you can slap on your book (or anything else). The Buy Local First movement that was initiated by independent booksellers and the Indies First campaign–where authors volunteer their bookselling services at independent bookstores–started by Alexie have grown beyond grassroots campaigns. But the fight for survival goes beyond independent booksellers and local businesses. Publishing itself is in peril. 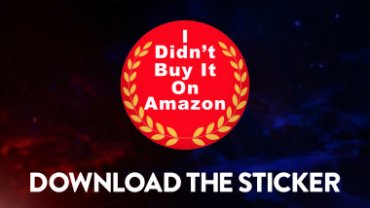 Am*zon has long been a threat to independent booksellers and local merchants of all kinds, but their concerns are getting unprecedented coverage as Am*zon and Hachette continue their negotiations while Am*zon makes Hachette titles less and less available. Nonetheless, the Goliath of merchandising still commands over 40 percent of all new books sold, and an astonishing 65 percent of all books sold online, including print and ebooks. As it works over Hachette, Am*aon is using its giant market share to force publishers to bear some of the brunt of its unprecedented discounting. Am*zon apparently doesn’t want to be the only one taking a loss as it sells books below cost. Now, Hachette is one of the biggest companies in publishing–it’s a huge, international conglomerate with dozens of imprints. With bated breath, publishers big and small are waiting to see if CEO Michael Pietsch can hold the line and insist that Hachette be compensated for the curating, editing, and marketing that it invests in every title it takes on. Am*zon contends that gatekeepers like publishers are an unnecessary nuisance, an expensive impediment blocking a fluid stream flowing from content producers to customers in brown boxes with smiles. But publishers and published authors argue that pages with text between two covers do not a book make, that publishers add important value that makes the product what it is by the time a happy reader takes in a first line. Blockbuster YA author John Green–who is NOT published by Hachette–puts it bluntly: “What’s ultimately at stake is whether Amazon is going to be able to freely and permanently bully publishers into eventual nonexistence,” adding that ”the breadth of American literature and the quality of American literature is in no small part due to the work that publishers do, and it’s very unfortunate, in my opinion, to see Amazon refuse to acknowledge the importance of that partnership.”

Ultimately, the future of books comes down to the delicate dance between culture and economics. Literature–like strong investigative journalism–by and large has never paid for itself. Big publishing houses depend on income from blockbuster celebrity books and the occasional literary hit to finance the risks they take on lesser known or unknown authors of literary fiction and creative nonfiction. At Torrey House Press, we’re still taking the financial risks out of pocket. And like everybody else in publishing, we make less per book on every copy Am*zon sells compared to sales to libraries and independent booksellers because Am*zon squeezes Consortium, our distributor, who depends on Am*zon for upwards of 30 percent of its total sales. While Am*zon represents a much smaller percentage of our sales thanks in large part to indie booksellers, what happens between Am*zon and Hachette could hold the line at the uncomfortable but probably bearable status quo or erode publishing with potentially devastating and lasting consequences, even for little us. If Hachette gets its legs cut off, I don’t know if even the indies can save publishing.

← Am*zon: The Smooth Brome Grass of Your Local Economy
Whole Foods and the Flat-Earthers →

A Hopi Perspective from the Rim, River & Road